Widowmaker is a Damage hero in Overwatch.

Widowmaker equips herself with whatever it takes to eliminate her targets, including mines that dispense poisonous gas, a visor that grants her squad infra-sight, and a powerful sniper rifle that can fire in fully-automatic mode.

12 seconds
Type
Ability
Widowmaker launches a grappling hook towards the location she’s aiming at – when the hook connects with a scalable surface, she’s quickly drawn towards it, allowing her to expand her view of the battlefield and evade or flank targets.
Move. speed:
20 meters per second (pulling speed)
Max. range:
20 meters
Cooldown:
12 seconds
Launch a hook that pulls you towards a ledge.
Details:
Example Video

1540 points
Type
Ultimate Ability
Widowmaker’s recon visor allows her to see the heat signatures of her targets through walls and objects for a moderate amount of time. This enhanced vision is shared with her allies.
Area of effect:
Map-wide
Casting time:
0.5 seconds
Duration:
15 seconds
Ultimate cost:
1540 points
Provide your team with a view of the enemy's location.
Details:
Example Video

Widowmaker is the archetypical sniper of Overwatch. Equipped with a powerful scoped rifle, she is capable of taking down the majority of the game's heroes with a single fully-charged headshot, and is still able to deal serious damage with bodyshots. Her Infra-Sight and Venom Mine give her and her team considerable information on enemy movements, allowing them to easily counter ambushes and coordinated pushes.

Widowmaker is, however, relatively weak in close-range combat, and her immobility while scoped makes her an easy target; Widowmaker's biggest threat is often another, better Widowmaker on the enemy team. She's often forced to play away from the objective where she's safer, as her only real mobility is Grappling Hook which can have a long cast time and leaves Widowmaker fairly defenseless to another attack.

Widowmaker is the perfect assassin: a patient, ruthlessly efficient killer who shows neither emotion nor remorse.[2] She is unaffected by low temperatures.[3] 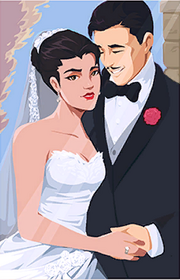 Amélie and Gerard are married

Amélie Guillard grew up in her family's ancestral home of Chateau Guillard.[4] For much of her life, she was known as an accomplished ballet dancer in Paris.[5] She married Gérard Lacroix, an Overwatch agent spearheading operations against the Talon terrorist organization. After several unsuccessful attempts to eliminate Gérard, Talon decided to change its focus to his wife. Talon operatives kidnapped her and subjected her to an intense program of neural reconditioning. They broke her will, suppressed her personality, and reprogrammed her as a sleeper agent. She was eventually found by Overwatch agents, apparently none the worse for wear, and returned to her normal life.

Two weeks later she killed Gérard in his sleep.

Her mission complete, Amélie returned to Talon, and they completed the process of turning her into a living weapon. She was given extensive training in the covert arts, and then her physiology was altered, drastically slowing her heart, which turned her skin cold and blue and numbed her ability to experience human emotion.[2] The slowing of her heart rate allowed her to become an exceptional sniper.[6] Thanks to Talon's experiments Amélie was gone, replaced by "Widowmaker," Talon's most effective assassin, and feeling little save the satisfaction of a job well done.[7] As far as Overwatch knew, she had been kidnapped.[8]

Widowmaker was present in an anti-Talon operation conducted by Overwatch, as a force led by Jack Morrison rescued a number of scientists that Talon had taken hostage. While Overwatch was successful in this regard, Widowmaker was able to take out a number of agents. The operation led to a sniper duel between her and Agent Amari, as they made their way throughout the urban terrain. Ana was able to temporarily incapacitate Widowmaker, hitting her in her helmet. But upon seeing Widowmaker's face, she froze, recognizing Amélie. It was all the time Widowmaker needed to take her own shot, shooting Ana through the scope of her rifle and into her cybernetic eye.[8]

Widowmaker was sent to King's Row to assassinate Tekhartha Mondatta, the Shambali leader, as he made a speech. As she made her way to her vantage point, she reflected upon how she had been frightened of spiders as a child, drawing an implicit comparison to Widowmaker herself -- neither one felt emotion or had a beating heart. She lowered herself, upside-down, off the side of a building using her grappling hook and began to line up her shot. However, unbeknownst to her, Tracer was also at the speech. Just before she could press the trigger, she was distracted by Tracer blinking through the air towards her, pistols firing. The two engaged in a rooftop chase as Mondatta was ushered away, having been warned by Tracer. In the end, Tracer's pulsebomb backfired and blew both of them into the air. As she fell, Widowmaker took careful aim, and fired a single bullet at the center of Tracer's chronal accelerator. Tracer blinked forward, and the bullet sped on—straight into Mondatta, killing him moments before he entered his limousine. Tracer tackled her to the rooftop, demanding to know why she would do such a thing, but as a Talon aircraft arrived to retrieve her, Widowmaker just chuckled, whispered, "Adieu, chérie," ("Farewell, darling,") and flipping the pair over the edge of the roof, slammed Tracer into the building's wall below them. Leaving incapacitated Tracer behind, as Widowmaker was spirited away from London she reflected that spiders did indeed feel—when they kill.[9]

She later reflected that her assassination of Mondatta was one of her finest kills.[3]

Widowmaker lines up her sights

Widowmaker teamed up with Reaper as part of an attempt to recover Doomfist's gauntlet. She was hindered in this by Winston and Tracer however. The mission was further complicated by a child stealing the gauntlet, and using it against her. After Tracer disarmed her, she made an escape with Reaper using her grapple, though both agents engaged in pursuit.[10]

Widowmaker gets ready to make the shot

Alongside Reaper and Sombra, Widowmaker was assigned to assassinate Katya Volskaya, the CEO of Volskaya Industries. Sombra was able to take down the facility's security system, allowing Widowmaker and Reaper access to the site. Widowmaker lined up her sights from a vantage point, and waited for Katya to enter her field of fire. She almost did, but an alarm sounded, sending the base into high alert and Katya to her fortified office. Widowmaker tried to salvage the shot anyway but narrowly missed the CEO, instead shattering the lower half of her hanging right earring. Reaper ordered her to stay put while he took her out, but he was waylaid by a mech. Sombra engaged in pursuit, but reported that Katya had escaped. Reaper ordered that the operatives return to their ship.[11] 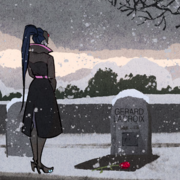 During Christmas, Widowmaker took a visit to Gérard's resting place. She left a rose on her husband's grave.[12] 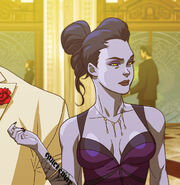 Widowmaker at the casino

After Doomfist was freed from his prison by Reaper, he rendezvoused with Widowmaker at a casino in Monaco. He complimented her for her assassination of Mondatta. Sombra, who was on the same channel, told Doomfist to ask her about her failure to assassinate Volskaya, but Doomfist shut down the conversation. Doomfist met with Maximilien at a game table; Widowmaker partook in the game while they discussed matters pertaining to Talon. She won quite a few chips, but the game was interrupted by Talon agents sent by Vialli to assassinate Doomfist. The pair fought them off and departed, headed for Venice. There, Widowmaker, Reaper, and Sombra eliminated Talon agents loyal to Vialli, while Doomfist killed Vialli himself.[13]

Widowmaker returned to her ancestral home at some point.[4]

Widowmaker's design originated from a playable class in the cancelled Titan. In the original pitch for Prometheus, the class was named Longshot and wielded a sniper rifle and machine pistol, and had the Grappling Hook and Recon Visor abilities. Longshot would appear in a later pitch for the game with a new design more closely resembling Widowmaker, and was also featured prominently in the Prometheus "hero lineup" key art.[19] The first concept for Widowmaker was to create a ranged sniper character.[20] She was one of the easiest characters to animate in the game,[21] and was one of the first three characters designed for Overwatch, alongside Tracer and Reaper.[22] Her venom mine ability originally created a much larger and deadlier explosion.[23]

Developer Comment: Widowmaker has become stronger over time following changes to other heroes, such as power reductions to barriers. This change is intended to slow down her shots, reducing her overall DPS.