Wrecking Ball is a Tank hero in Overwatch.

Wrecking Ball rolls across the battlefield, using his arsenal of weapons and his mech’s powerful body to crush his enemies.

Melee
Wrecking Ball launches a grappling claw, enabling him to anchor to an area and swing from it. If he strikes an enemy with a powered-up swing, they’re damaged and knocked back.
Damage:
50 (high speed)
Move. speed:
+100% buff (swinging)
18 m/s (rolling)
Max. range:
23 meters (eventually retracts to 6 meters)
Duration:
1.5 seconds (after release)
Cooldown:
5 seconds
Launch a grappling claw to rapidly swing around the area. Enables high speed collisions to damage and knockback enemies.
Details:

hooked, or knocked down; or if he tries to shoot.

B.O.B. counts as an enemy for creating extra shields.

As an offense-oriented tank hero, Wrecking Ball's greatest strength lies in his high mobility, which he uses to disrupt the enemy team by forcing them out of position and initiating team fights. A good Wrecking Ball is excellent at establishing area control, knowing when and how to engage and disengage the enemy to create opportunities for his teammates. He can do so at will by switching between walker and ball mode as the situation changes. The dual machine guns deployed in walker mode provide a hitscan-ranged attack in exchange for mobility, while ball mode allows Wrecking Ball to damage enemies up close and quickly travel across the battlefield. Wrecking Ball's grappling hook allows him to tether to a surface to either gain vertical positioning and acceleration or to inflict contact damage within an area at top speed. Should he find himself outnumbered, Wrecking Ball can generate temporary shields to block incoming damage, which increase with the number of enemies nearby. Lastly, Wrecking Ball has strong area denial by deploying a mine field, which inflict heavy damage to any enemy that comes into detonation range.

While Wrecking Ball is a more mobile tank than Winston, he has no means of directly protecting his teammates from damage, making him a poor choice as a solo tank. His high dependency on his abilities and mobility makes him a sitting target when they are being limited or disabled. Furthermore, his massive size also makes him an easy target for the enemy team to focus fire if he cannot escape.

Described as "witty and conniving," Hammond is capable of speech, just not in any human language. His mech (named "Wrecking Ball") translates his comments into English,[2] via a soundboard. The mech itself is equipped with a minor AI.[3] Winston is the one individual Hammond can converse with normally as they're both animals. 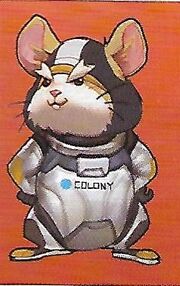 In one of the many experiments carried out at Horizon Lunar Colony, animals were given genetic therapy to assess their adaptation to extended periods of habitation on the moon. As an unexpected side effect, several of them exhibited exceptional growth in physical size and brain function. While most of the test subjects were gorillas or other primates, there were some exceptions, including a hamster designated Specimen 8,[4] but whom the staff named "Hammond".[3] He was contained in a large cage in his own room.[5][6]

Like the others, Hammond's intelligence grew.[3] He demonstrated impressive problem solving skills and adaptability,[6] and he became more curious about the world around him. Much to the puzzlement and amusement of the scientists, Hammond would frequently escape into different parts of the moon base.[3] The staff had more trouble keeping track of Hammond than any of the other test subjects, and in at least one case, it was days before he was returned to his holding area.[4] Though they'd always find him and return him to his cell, they never figured out the true purpose behind his nightly escapades. What they didn't know was that Hammond was busy teaching himself the skills of a mechanic, which would soon come in handy.[3]

In time, Hammond became good friends with one of the gorillas, Specimen 28.[4]

Before the base's fall, Hammond escaped from his cage. Dr. Zhang noted his absence, but few within the base gave it much heed. Hammond possibly escaped into the base's ventilation system, as in the same timeframe, Flores noted strange noises coming from the system.[7] The colony was eventually thrown into chaos when some of the gorillas rose up against the human scientists and took control. Not all of the animals participated, however, and Specimen 28, taking the name "Winston", was making a plan to escape to Earth. Hammond sensed his opportunity, prototyped a basic build plan using toys in his room, then finalized his build onto a blueprint with sticky notes.[6] Ignored in the uprising,[6] he converted an empty fuel pod into a makeshift escape capsule with a claw arm and tether,[8] and secretly hitched it to the bottom Winston's craft as the gorilla blasted off from Launch Bay 14. As the two entered Earth's atmosphere, the tether broke;[6] while Winston landed at Watchpoint: Gibraltar, Hammond landed in a different location: the wasteland of the Australian Outback, on the outskirts of Junkertown.[3][4]

One of the primates would eventually break down the door of Hammond's room for whatever reason, but by that time the hamster was already gone.[6][9]

Hammond modified his escape pod to become the cockpit of his own mech, which he built around it,[6] to enter the lucrative mech battle arena of the Scrapyard. Working his way up the ranks amongst the Junkers, the competitor known as "Wrecking Ball" went from contender to champion and had fun winning numerous times,[10][11][4] though the pilot's identity remained a mystery to all. As much fun as he had, Hammond never considered himself to be a Junker. Gathering his winnings, Hammond was able to upgrade his mech enough to survive the dangerous trek out of the Junker-controlled Outback.

Now free to travel and do as he pleases, Hammond is exploring the world and finding new adventures along the way.[3]

Years later, Lucheng Interstellar was able to retrieve information from Horizon's still-operating monitoring system. Hammond was noted to be missing from the base.[7] 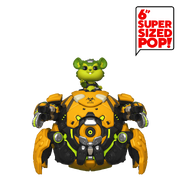 The concept for Wrecking Ball actually originated early in Overwatch's development, during the game's original character design phase, as "Ball Guy," a spherical robot Arnold Tsang created while exploring circular robot designs, which stemmed from an early unused concept of Junkrat wearing a bomb-shaped suit. Geoff Goodman began designing this version of the hero as a "junkyard magnet bot," a robotic tank hero with a kit themed around magnetism, including abilities that allowed him to attract and repel bullets. At around the same time, the concept artists were doing preliminary ideation for a "cute hero," which included several prototype designs of robots, rodents, and a robotic monkey, as well as precursors to D.Va; this same ideation phase would eventually produce Jetpack Cat. Eventually, these two lines of ideation would converge on the idea of a hamster in a hamster ball, and Arnold Tsang illustrated the first iteration of Wrecking Ball, as a robotic hamster piloting a quadrupedal robot that could transform into a sphere.[8]

The first iteration of Wrecking Ball.

The illustration was emailed out and clicked with the designers, but this new direction proved to be controversial within the Overwatch development team, with some loving the idea and others believing it would ruin the game. In 2014, Jeff Kaplan, Jeffrey Brill, and Randal Dumoret had a disagreement over the hero's inclusion, with Dumoret falling into the latter camp. The discussion resulted in Brill scheduling a meeting in 2024 to determine whether or not Wrecking Ball had ruined the game, and that if he had, he would be removed from the game at that point. Though the team fully intended to eventually release the hero, they didn't feel it was the right time, and so Wrecking Ball remained shelved until some time in 2017, when he was brought back up and they started seriously discussing his implementation.[8]

Revisiting the concept, they decided that a mechanical hamster couldn't be as cute as an actual hamster. Using Tracer as a reference point they produced a number of hamster concepts to hone in on a specific style that suited Overwatch's "East meets West" aesthetic, ultimately deciding on a design that fell in between Hamtaro and Zootopia.[8] According to Kaplan, they also deliberated over Hammond's size, eventually deciding that he should be "Pikachu-sized."

From there Wrecking Ball went through various design iterations with mechanics that focused on rolling around on the ground and down slopes to gain momentum and smash into enemies. Eventually, the grappling hook was incorporated into his kit, which fit into his wrecking ball theme, and his final design began to take shape with the Piledriver, Adaptive Shield, and Minefield abilities pulling everything together.

While designing Wrecking Ball's legendary skins, because the hero concept was already quite different from the other heroes in the game, they decided to ground his default legendary skins in the existing Overwatch story, with his Junker skin reflecting his time as the Champion of the Scrapyard and his Lunar skin reflecting his time as an experimental test subject on the Horizon Lunar Colony.[8]

Prior to his release, an Overwatch tweet was released containing a video that featured several posters on a wall, one of which was a Horizon commercial displaying most likely a chimpanzee or a similar specimen flying in space.[15] This led to speculation that this was teasing Hammond as a playable hero.[16] With the release of the Patch 1.25, a new room was added to Horizon Lunar Colony neighboring Winston's room with the text "Specimen 8" written on the door, confirming that this was Hammond's room.

Developer Comment: Wrecking Ball has a very active playstyle, but it often felt difficult to make good use out of his ultimate. This change allows him to spread out his Minefield further if he wants (especially from high in the air), while still allowing for a tighter cluster if he activates it near the ground.

Developer Comment: This will make Adaptive Shield a more powerful survival tool, since being forced out of Roll mode left Wrecking Ball more susceptible to fire.