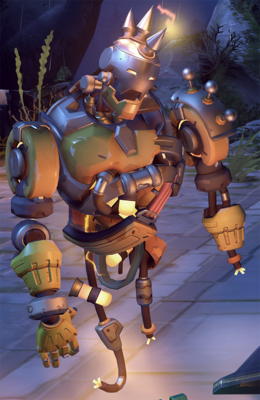 Zomnics are a type of automaton created by Dr. Jamison Junkenstein.

Zomnics are horde enemies in the Halloween brawl Junkenstein's Revenge. 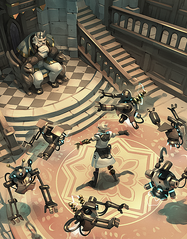 Junkenstein shows the lord his creations.

The Zomnics were created by Junkenstein for the Lord of Adlersbrunn who saw them as mere trinkets, and "nothing more than slaves." Junkenstein could not handle this criticism, so to prove his worth he aimed to create true life, however his attempts were all unsuccessful. Only when he made a deal with the Witch of the Wilds did he finally bring his monster to life, and soon he had the creature destroy the town and all those who ridiculed him.[1]

As for the Zomnics, Junkenstein next sent a whole army of them to ransack the lord's castle. The hordes of Zomnics faced off with four heroes that were called to defend the castle against the attack.[2] The heroes succeeded in stopping the Zomnics as well as their creator and his creature. Peace was only temporary as the Witch resurrected the fallen Junkenstein, allowing him to rebuild his army. The new and improved Zomnics then fought alongside the Witch's other pawns in an endless night of attacks on the castle of Adlersbrunn. Four new heroes were there to stop them, as the previous wanderers had long ago. [3] 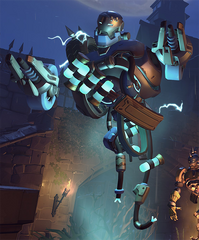 Zombardiers are a subtype of Zomnic. Unlike regular Zomnics, Zombardiers stay in one place and have the ability to shoot from built-in energy guns in their arms.